How Morocco Is Making History

How Morocco is making history in the World Cup.

The surprise and revelation of the World Cup has been the Moroccan national team, which has already managed to reach the semi-finals of the championship, with an impeccable record, leaving countries like Belgium, Spain and Portugal by the wayside. The Moroccan team was not in many people's plans to reach the semi-finals, but they have already made history by being the first African team to reach this far in a World Cup.

It is a humble team that, based on enthusiasm and a great physical effort, are competing at a high level and winning their games, but they are not only winning because of aspects that have to do with the attitude of their players, but also because behind them is a very well worked team at a tactical level.

Their great strength in the game is at the defensive level, being the team that has conceded the least, conceding just one goal. It is true that it is a team that does not enjoy great moments with the ball and has very low percentages of ball possession, but defensively they are a very difficult team to find space to attack them, combining very well a job in terms of wear and tear of their players in running, with a great defensive tactical sense of the game.

Next, we will analyse Morocco's strengths in the victory over Portugal in which they followed the same line of play they have been using during the World Cup.

Defensively they are a team organised in a 1-4-1-4-1 format with three midfielders in midfield who occupy a lot of space and have a lot of defensive space. One of the variants they tend to use in their format is to drop their two wingers deep to the level of the defensive midfielder and be the two inside midfielders who will press. For a team that positions itself in a low block, this means they are protected and dominate the central area of the pitch. 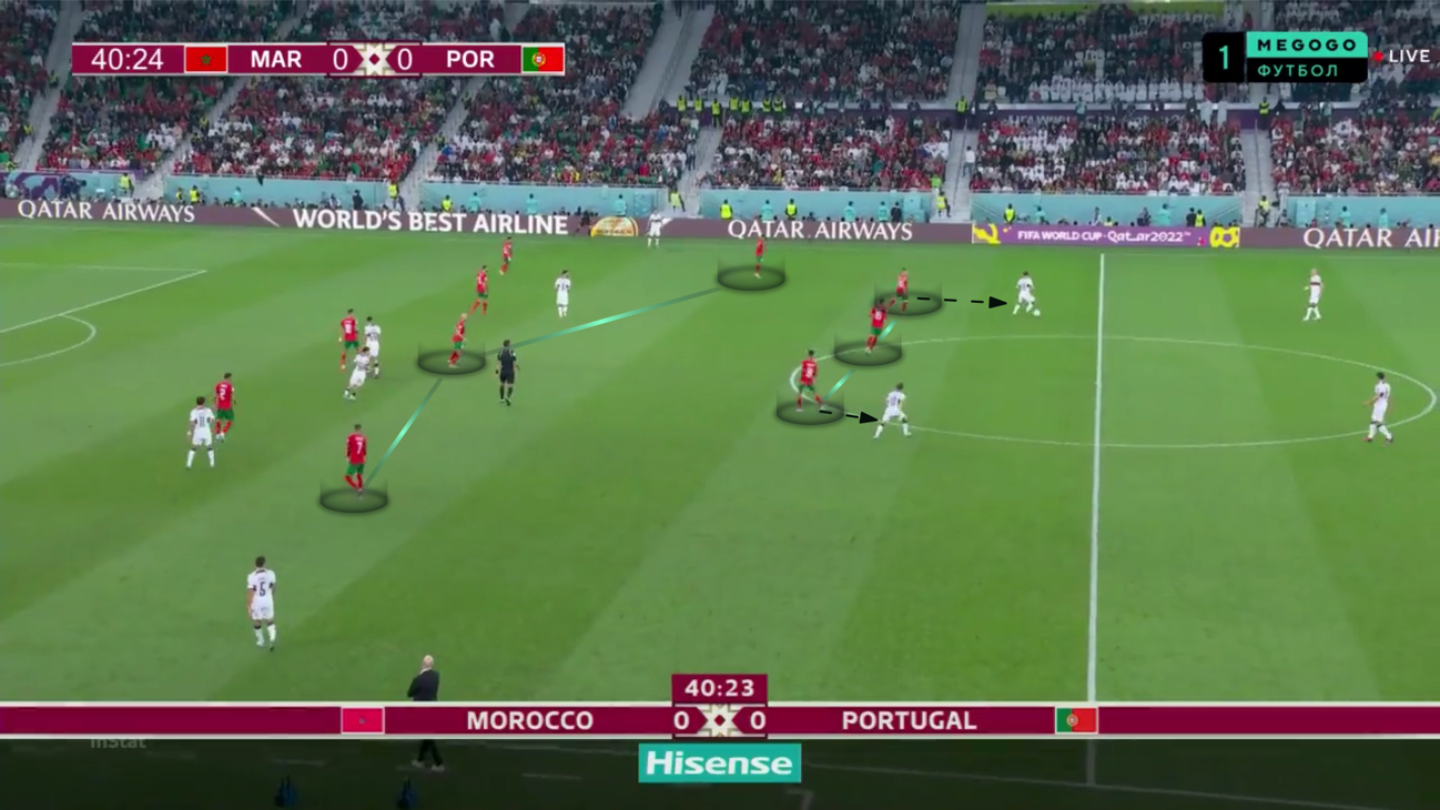 In the image we can see that the wingers are further back at the height of the defensive pivot and the inside players are the ones who go out to press forward on the ball holder. But always starting from a low block.

Depending on the ball zone, an inside player jumps out to press and the opposition always closes further back, as we can see in the image below. This cover from behind means that they are staggered at different heights in their positioning between lines and as they are positioned diagonally they occupy a large amount of space. They close off all passing between the lines and the only option left to Portugal is to start backwards, which does not create any danger for the Moroccan defense. 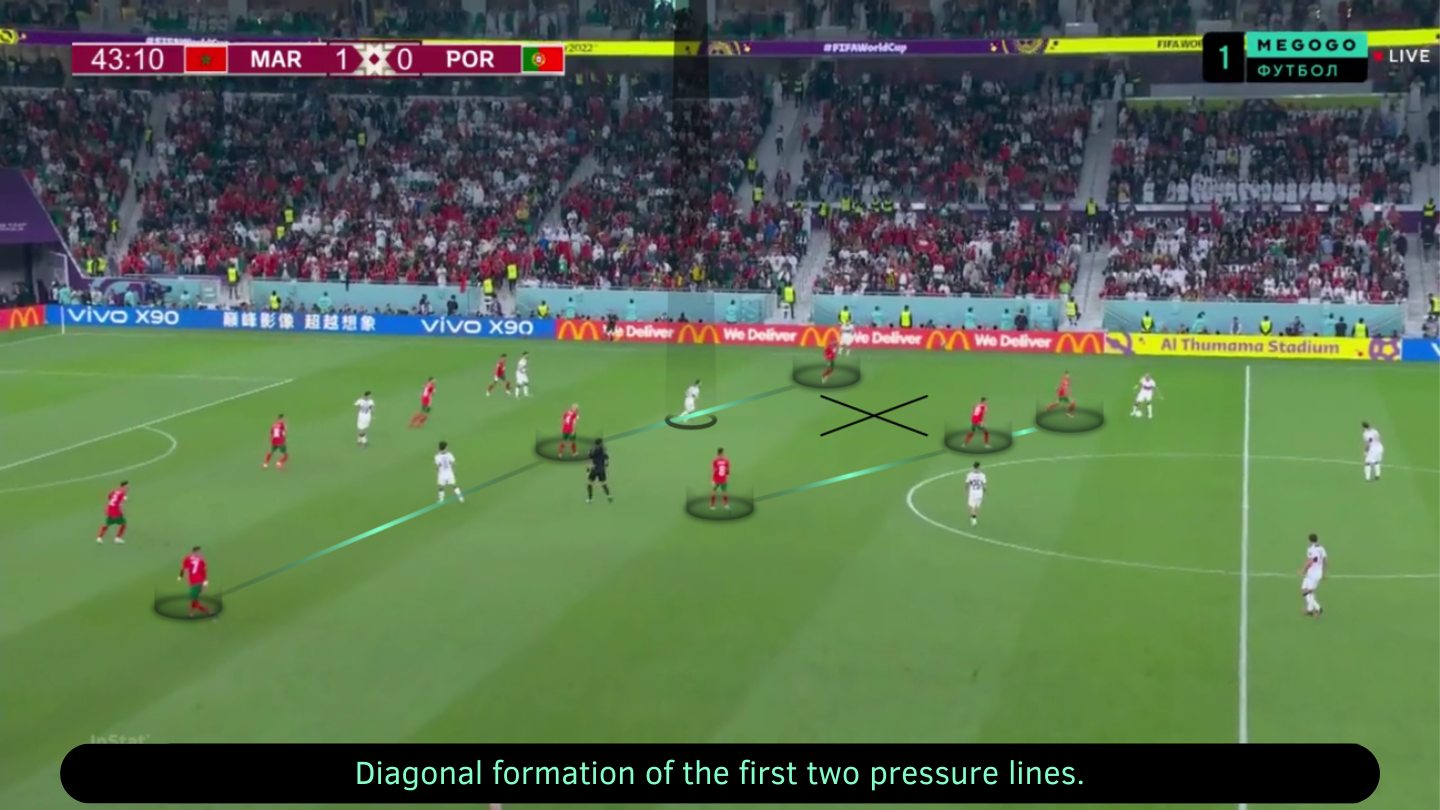 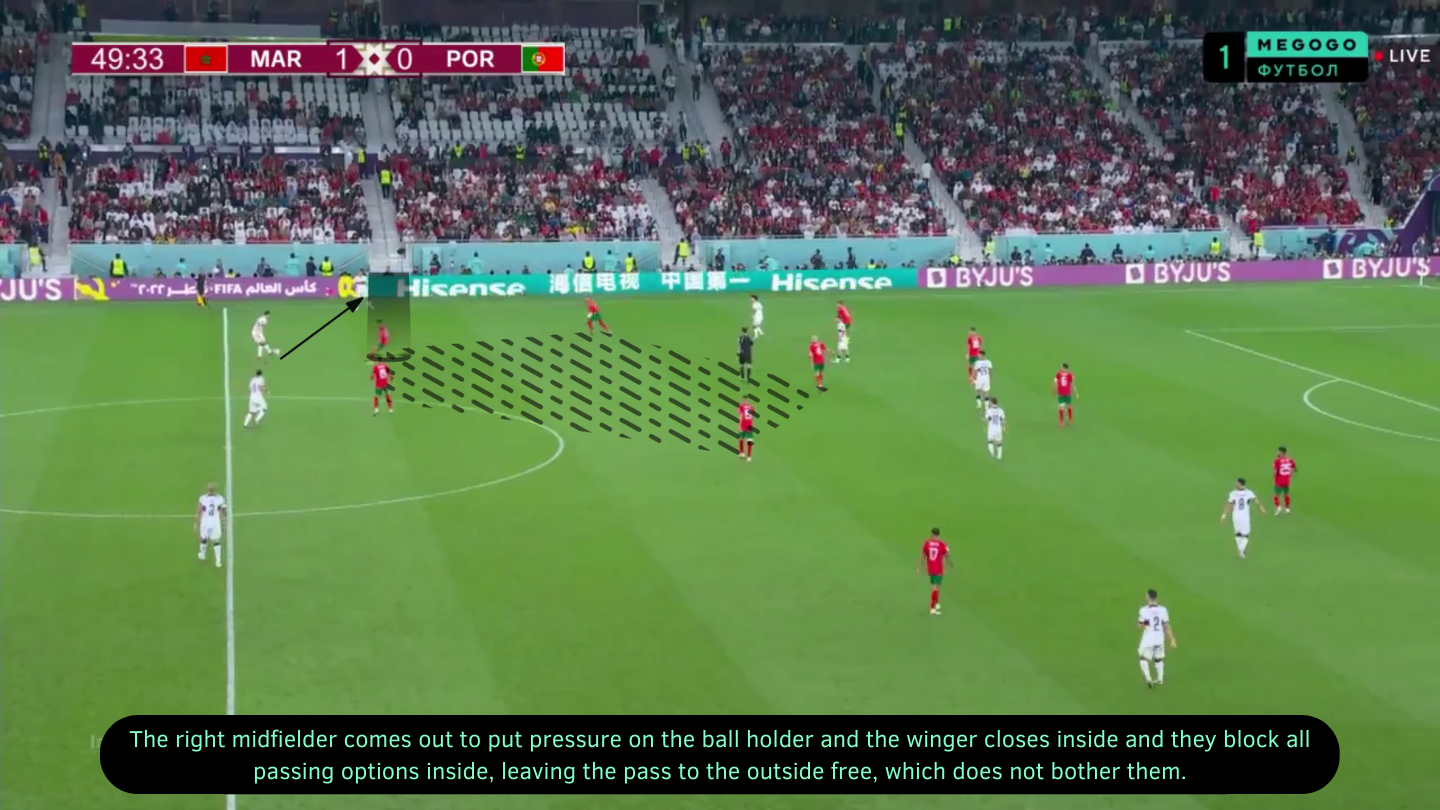 We can see in this first image how, with the ball in front of Portugal's left centre-back, slightly open, Morocco's right inside player jumps out to press him and behind him closes the winger and his two remaining midfield players swing in, accumulating several players in the ball zone. The only pass left for Portugal is to play out wide with a full-back. 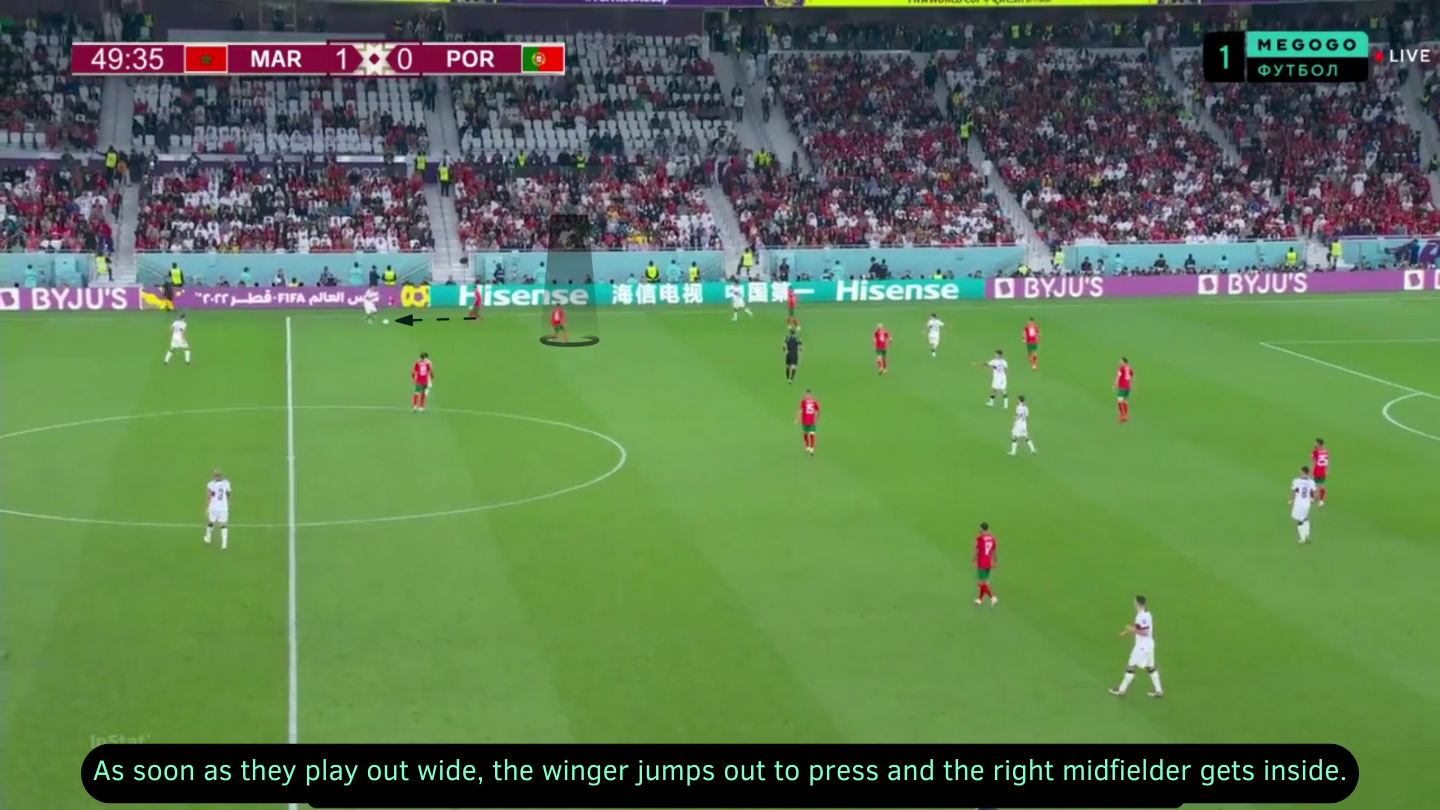 Once he receives a full-back, the winger jumps in and the inside right back closes on him, who forgets about the centre-back and quickly returns to his original position on the inside, making it very difficult for the Portuguese attack to progress and forcing him to go back to playing at the back with a centre-back.

This whole defensive process requires great talent at a collective level to be able to constantly get to the assists and be a compact unit. It also requires a lot of resilience from the group, to see that they don't have the ball, but they don't feel subdued by the opposition, they wait for their moment, they cover all options for progression and they know that during the course of the game some opportunity will arise, especially in attacking transitions. In attack they have very quick players with space and when they steal the ball they look to run and send balls down the flank. 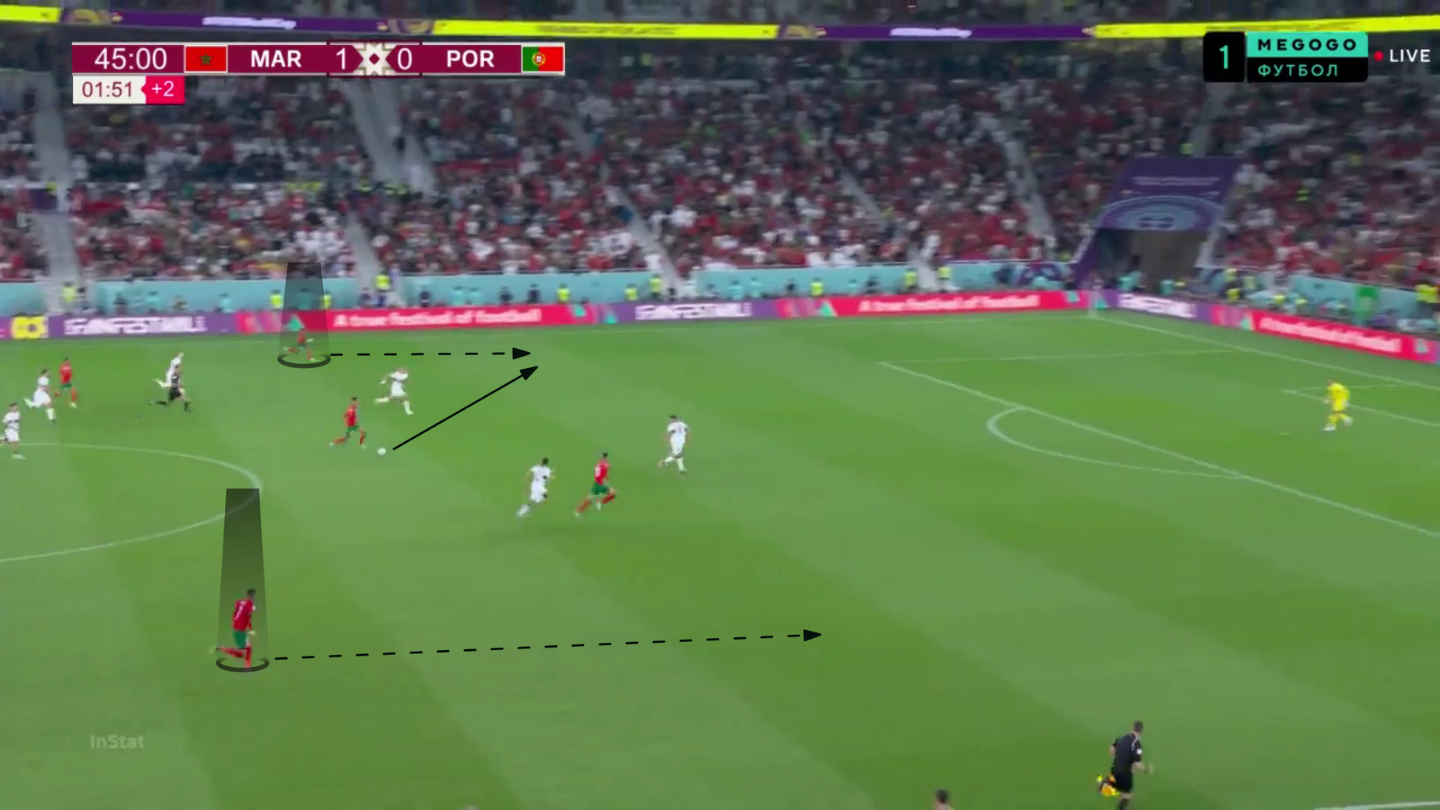 This is the case in the image, they have stolen the ball, they play with an inside right who carries the ball down the central lane and on the outside, the left winger Boufal and the right winger Ziyech, two quick and skilful players who can do damage in space, are already deployed.