Argentina: the road to victory

Last Sunday Argentina was crowned world champion for the third time in their history, after 36 years without winning it, in a country that was completely behind their players. A team that started the tournament losing against Saudi Arabia and sowing many doubts, since from that game onwards all the matches that followed were decisive between winning and moving forward or losing and having to return home without the trophy. The Albiceleste team, as they progressed, became more solid in defense, with players totally committed to the cause, leaving everything on the pitch and fighting for every ball, and in attack, taking advantage of the talented potential of their players, led by Leo Messi, named best player of the World Cup, who put the team on his shoulders.

The final had several moments in which both teams felt they were potential winners, although the only side that was ahead on the scoreboard was Argentina. The "Albiceleste" started the match in a blistering manner and the French team, World champions in Russia four years ago, looked nervous and imprecise, which meant that Argentina were already two goals ahead of France after just 35 minutes of the match, and with the feeling that they had the match under their control and already had the World Cup trophy in their grasp.

The second half was more even and there was a reaction from the Bleu team, who began to attack knowing that they had nothing left to do but go for the game and get their fears out of their system. But it wasn't until two minutes into the final period that Mbappe leveled the match, when the game was dying down and the title was going to Argentina. In extra time there was an exchange of blows and in the final stretch, when there was barely a minute left in the match, France had a very clear chance to score the 3-4 and win the championship, but Dibu Martinez appeared to make one of those anthological saves that will be remembered for all of history.

The final ended in the most agonizing way possible, deciding the champion on penalties, and from the eleven meters the best were the Argentinians, who after many years were once again World Champions.

In terms of the game, the Argentinian national team surprised with the starting line-up of Angel Di Maria, who was key in forcing the penalty in the first goal and scoring the second and constantly put France in a lot of trouble on their right side. In defense the presence of Di Maria meant that from being positioned in a 1-4-4-2 they switched to a 1-4-3-3 with the noodle pressing higher up on the right flank. 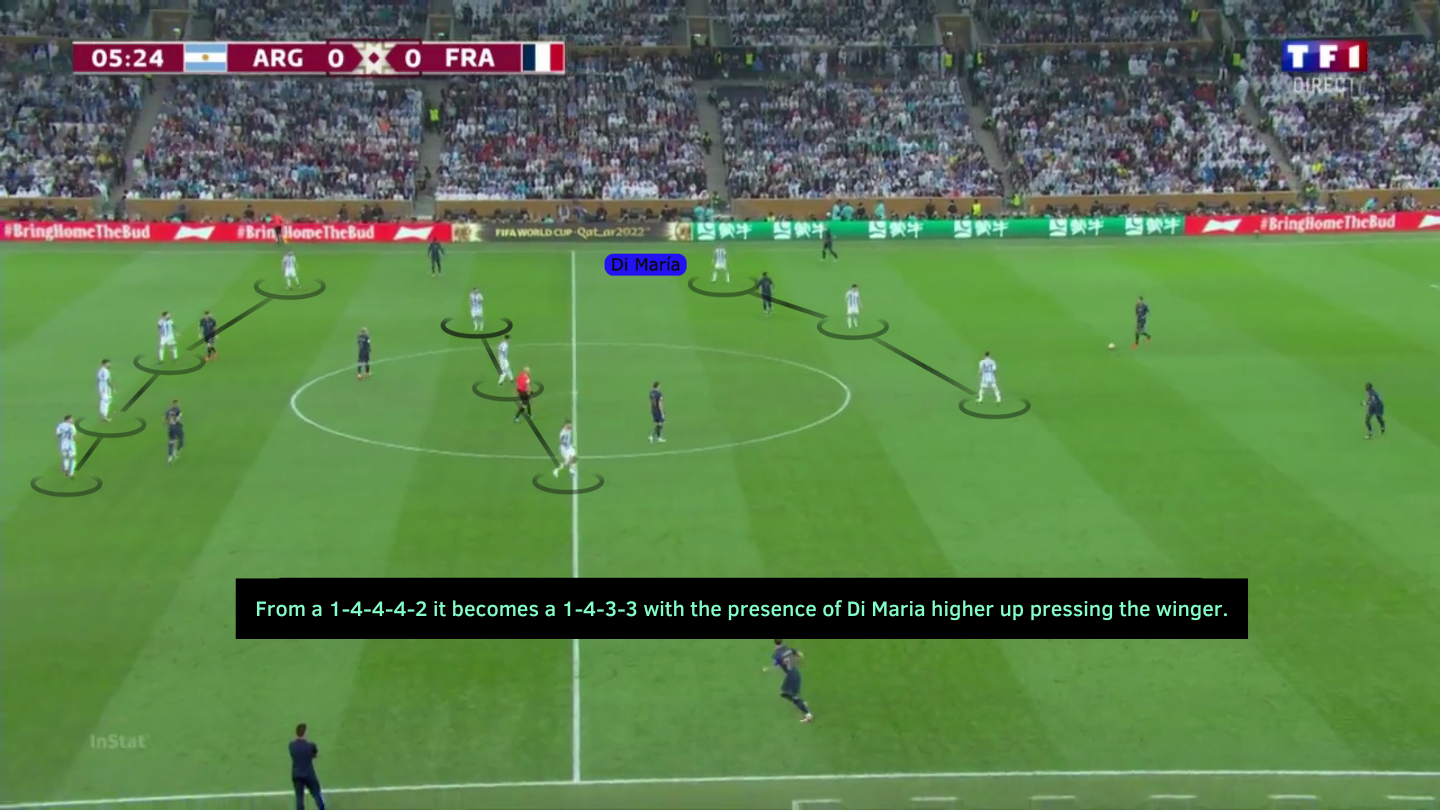 One of Argentina's defensive characteristics during the match and throughout the tournament was the intensity with which they went into all their individual duels, how hard they pressed their opponents and their ability to steal and recover balls in those duels, led by an imperial Nicolás Otamendi, who was the leader of the Argentinian defense. 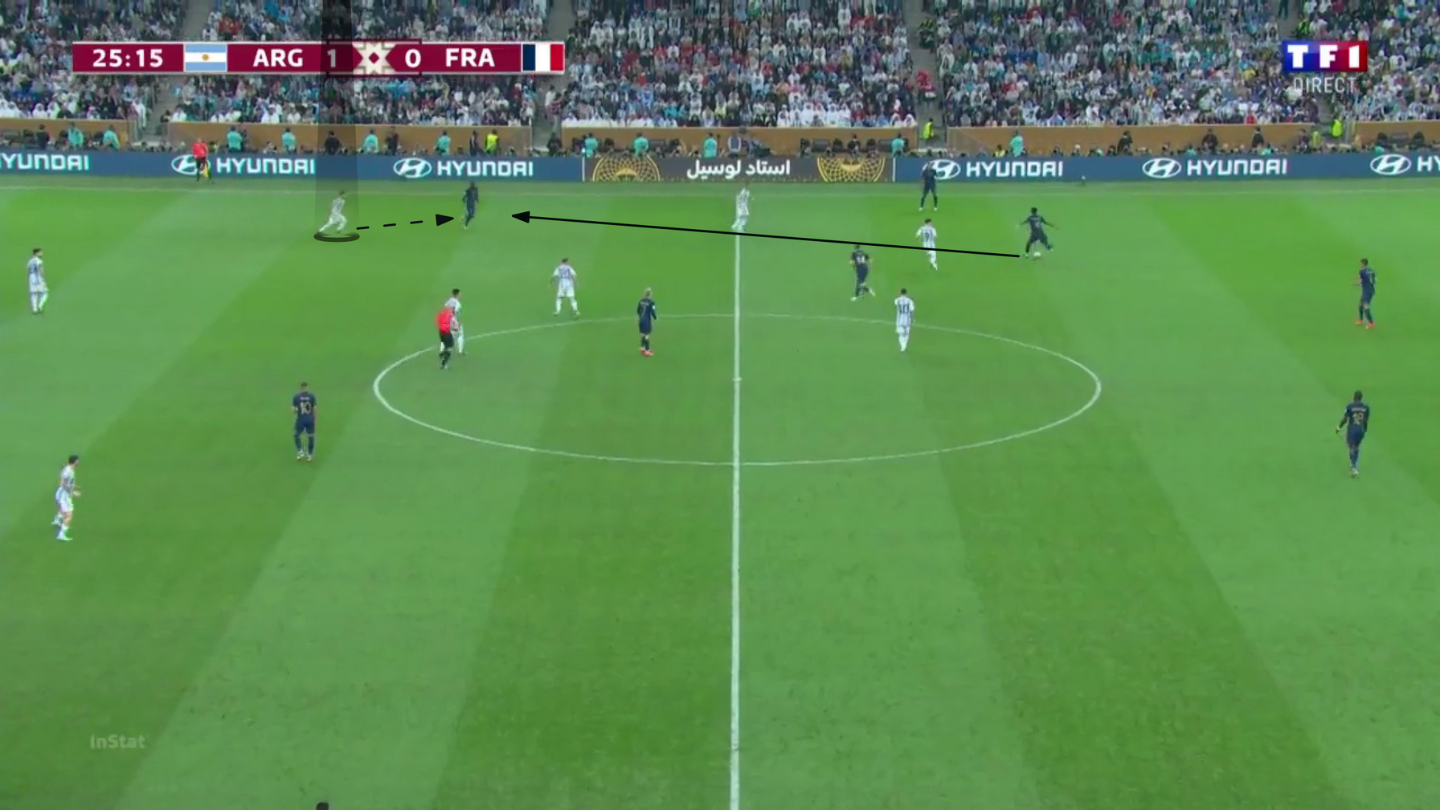 Every ball that France tried to filter between the lines was automatically squeezed by a player coming out from the back and forcing Argentina to lose and recover the ball.

In attack, they had a very asymmetrical system, as on the left side they played with a full-back and winger and on the right side they dispensed with having a winger and left the whole flank for the right-back Nahuel Molina, this gave them a lot of players in midfield and it was in those areas where they were able to achieve superiority that allowed them to progress in the game through many walls and often found Leo Messi free between the lines. 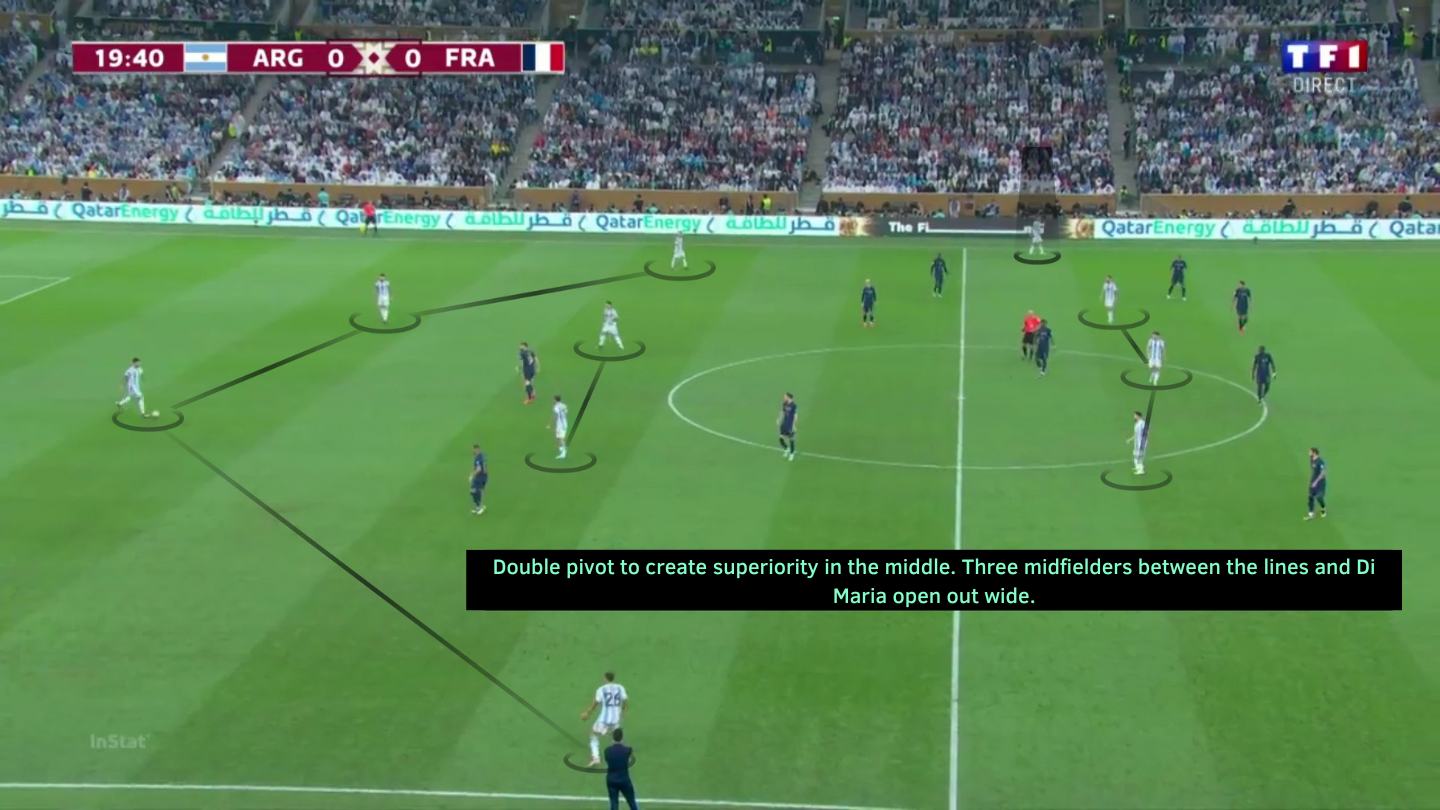 We can see in the previous image how on the inside they formed a double pivot with Enzo Fernández and Rodrigo de Paul, who is the theoretical right winger but came inside and created that constant superiority inside. Between the lines they placed three midfielders with Messi, Julián Alvarez and Marc Allister, giving space on the left to Di María who was often able to receive in one-on-one situations.

Messi's receptions lying on the right flank of his midfielders were a constant threat to the French defense, who found it difficult to control his movements. 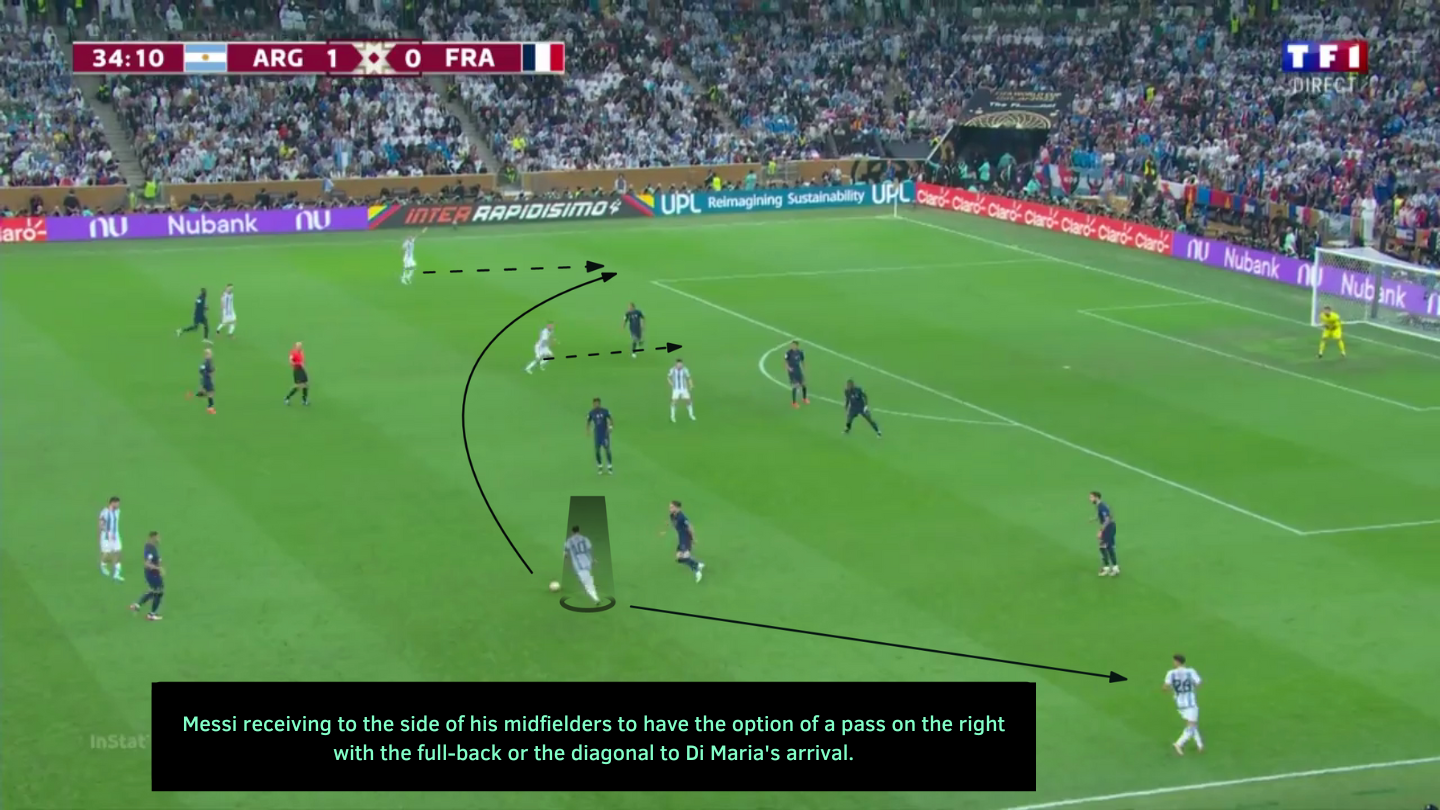 On Messi's passes, he had the option of passing out wide to Nahuel Molina to look for one-on-one situations or to look for Leo's typical diagonal shot to the opposite side for the arrival of the winger Di María, who always received the ball on top and in an advantageous position to finish or look for a one-on-one against Koundé.

Another point where Argentina created problems for the French defenders was in attacking transitions. They were always looking to play with the wide player to play with his face forward and look to run into space. It was from this play that Argentina's second goal of the match was born. 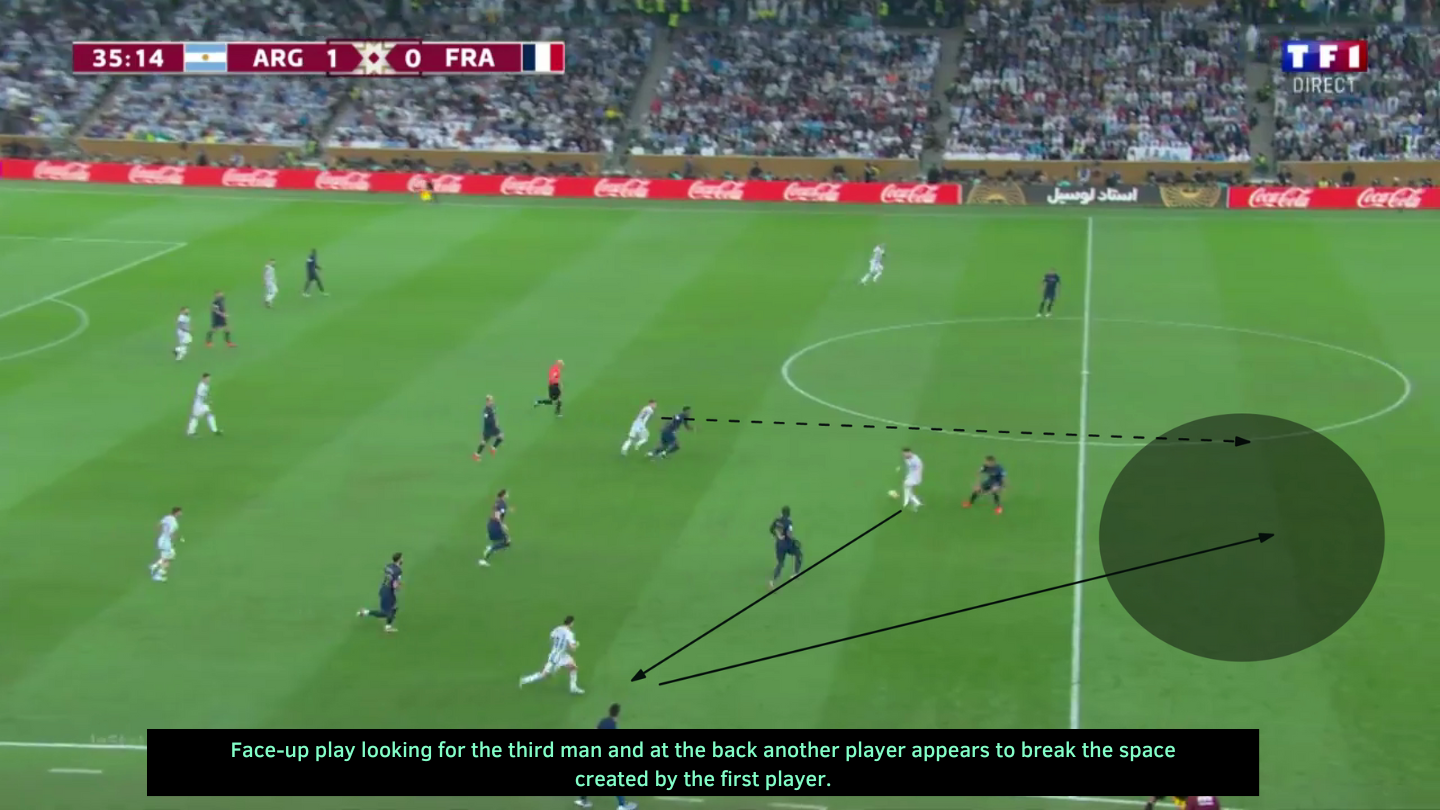