Last week, we asked our Twitter followers which team they preferred we analyzed, and the winner was...Pep Guardiola's Manchester City. For this 14th of February we've decided to share this analysis with you knowing that you love this British Team's gameplay. Enjoy!

The Manchester City of Pep Guardiola is doing an amazing job from a playing style point of view. It’s achieving historic numbers in the Premier League and breaking lots of stereotypes regarding gameplay in this competition. They are revolutionizing soccer with a team that prioritizes ball possession, always in the search of an organized attack with the help of talented individual players who also have an incredible collective strategy. When in a defensive phase, their organization is through ball possession; when they lose the ball, they’re already well situated on the rival field, they are ready to attack and exercise pressure to win the ball back. Defense is another signature tactic of Manchester City.

Manchester City is a team built to win, and they are reaching this objective with impressive numbers. More than 100 goals in their favor across all competitions, with an average of 17 shots to target per game and an average of 65% of ball possession. They’ve only lost 2 out of 40 matches. All of this is reason enough to make a detailed analysis of one of the most dominant teams in Europe.

They’ve used variations in their playing style, from the 1-3-5-2 to their most used 1-4-3-3, with variations depending on the lined-up players. 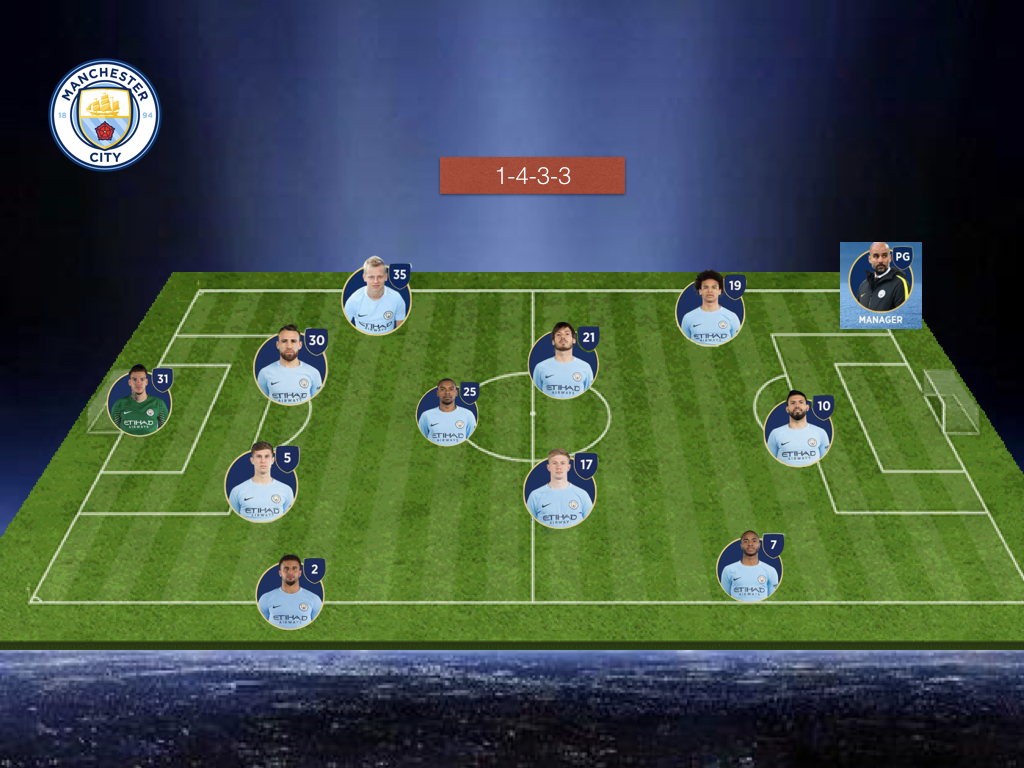 Fernandinho helps from the interior of the filed without completely getting in between centrals, this way he makes it easier for the ball to find its way out. The playmakers appear if the central midfielders have little options of playing with their closest colleagues (left/right backs or midfielders) but in general the playmakers create a lot of danger between lines.

Left and Right Backs vary their gameplay by playing very openly or by getting closer to receive more on the interior of the field. Walker remains more on the interior, giving freedom in the sideline to a player like Sterling, who is incredibly skilled on the 1 versus 1, and with more spaces to move towards De Bruyne.

When clearing the ball, they look for close support from Fernandinho to move ahead in an organized way. If there is no option to play with Fernandinho, a playmaker intervenes to, either find spaces to exit or to activate Fernandinho with front-facing pass.

During the game progression, one of the main objectives of the team is to connect on the interior of the field with one of the two playmakers. They must connect between lines and, from here, generate danger through spaces and fast players on the top of the field. The midfielders are players who have an outstanding quality to conduct the ball and filter passes on the inside.

These filtered passes to the playmakers are each closed better each time by the rival team. If this is the case, the team applies a variation where they look for the playmaker as a forward and play to front-faced with the previous line, applying the concept of the third man.

On finishing areas and using an organized attack, they look for triangulations on the sideline with the help of the side playmaker. If there is no option to progress, they change orientation and look to break the tilt of the opposing team by using the opposite side.

Manchester City is a team that, despite performing a good game combination, it also takes advantage of the spaces that the rival generates. They have fast players when it comes to conducting the ball from the inside of the field (De Bruyne and Silva), very fast sideline players (Sané and Sterling) and Agüero makes really smart moves when attacking. They’ve achieved 23 goals in offensive transitions, looking for verticality, moving forward diagonally and the players placed in both sides of the field are always generating spaces.

The Manchester City is a team who is ready to attack, but they are also carrying out a good performance at a defensive level. By maintaining long possessions of the ball, they can defend themselves without giving the opponent the possibility of getting the ball. There are lots of matches where, during the final minutes or in sequences where the rival team has more intention to attack, they look to maintain the ball without giving any options to the opposing team.

They organize their defensive positioning through intense pressure of their three strikers and with the help of the playmaker who adds pressure to force a long pass of the rival team and gain back the ball possession.

Another key point is the pressure they exercise after losing the ball on the opposing field. MC is a team with an offensive personality, with lots of players who have the capacity to get to finishing zones. They know how to stay close to each other and be prepared to quickly react when they lose the ball. This way, they can prevent the rival team from using the spaces that they leave behind.

The set-piece actions have also been very important for the team. MC has given priority to these actions, by achieving 26 goals across competitions (6 of them from the penalty point). Complicated matches like the one against Manchester United field or the Feyenoord in the Champions League have helped them to move forward thanks to set-piece goals. Nicolas Otamendi is an expert in this area and has scored 5 goals. We must highlight that, except penalties and 4 more goals, all the others come from a short corner kick or from a second play they’ve taken advantage of.

The City pays a lot of attention to set-piece actions performed by the rival team. This seems as an opportunity for the rival teams to take advantage of these actions to create danger; however, MC is doing a great defense job. 7 goals received from set-piece actions across competitions, 4 of them were penalties and 1 own goal when defending a corner. 2 goals received from corner and direct shots. They execute combined markings with the majority of the players defending in zone and one player marking the most dangerous players who attempt to shoot to goal.

We are in front of a team who absolutely dominates their matches. They have lots of different ways to create danger whether they have the ball or not. They organize themselves in a fast and effective way and don’t give options to their rivals. They are beating records in a complicated league as it is the Premier League, where there’s no doubt Pep Guardiola will achieve his first title. We’ll see how they progress in the European competition, but it is, without doubt, a clear favorite to win the trophy.

If you want to perform an analysis like this one, give LongoMatch a try and download the Basic version today.