The 26-year-old Belgian playmaker is a very important element in Manchester City’s season.

His role in Pep Guardiola’s common playing scheme, the 1-4-3-3, is acting as a right midfielder with a lot of freedom of movement in that right lane and with freedom to appear in other areas of the field, moving a lot between lines. 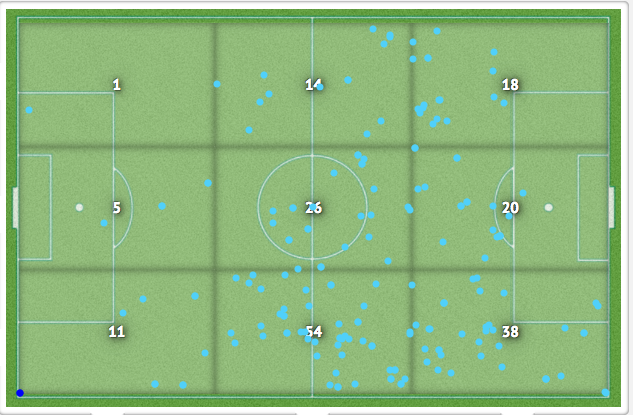 As we can see in his performance in the last game they played against Chelsea FC, the player intervenes 187 times, either with the ball or without the ball. Of those 187 actions, 103 are throughout the right lane of the attack in the central area of the field.

His statistics show us how important he is for his coach; this is proven by his large number of assistances, which makes him a reference worldwide, in this regard.

As we have already mentioned, he moves a lot on the right side and with great technical ability to give fluency to the team's gameplay. He has an outstanding capacity to find free spaces and place himself between players to receive the ball with advantage and give continuity to the departure of his team with the ball. He is a very helpful player since he activates the game with the midfielder.

When the team is experiencing a high amount of pressure, they look for De Bruyne so that he gives solutions to exit the ball. In order to do this, he positions himself between lines and away from the rival’s pressure to connect with the attacking elements of the team. The body orientation is very good to move forward.

He also has a great skill to find and attack the free spaces. He moves towards advanced zones of the rival field with great intelligence to occupy free spaces, with an excellent level of ball conduction that allows him to be helpful when linking the attack with the strikers.

One of the aspects in which he is being most valued at European level is for his goal assists, adding 27 assists which makes him the European player with the best numbers. Technically he has a good hit with the right leg and he knows how to find the spaces at the right time. In average, every match, he puts about 7 balls that end up very near to the goal area.

Despite being a player with great offensive capabilities, he is not far behind in his involvement and participation at the defensive level. He applies pressure when the ball is possessed by his opponents in his area of influence, to prevent them from progressing easily.

The rival teams try to make a very fast offensive transitions. The quick withdrawals of Manchester City are very important, to avoid receiving a goal. De Bruyne is key and helps the team out in these situations.

De Bruyne is in charge of executing the strategic actions, contributing with good assists and even a direct free-kick goal. He has a amazing way of hitting the ball with his right leg.