The countdown for the World Cup in Russia has begun and eyes are set on the Spanish National Soccer Team in the hopes it repeats the 2010 deed and comes back home with the Cup. This is why we decided to do a tactical analysis of one of the favorite teams to get the trophy.

For the Spanish Team, the path to the World Cup couldn’t have been better -their classification stage was flawless with just one tie and nine victories. Together with England, Spain was the team with fewer goals received. Regarding scored goals, Spain was only surpassed by Germany and Belgium. We can also highlight their success in friendly matches, where they haven’t been defeated since Julen Lopetegui started as their coach and who, for the first time, will be leading a National Team to the World Cup.

Lopetegui’s biggest challenge might be deciding the final list of players, since most of them have proven highly valuable and are standing in line to be a part of the team. Three weeks ago, we were able to see the last official call before Lopetegui’s final list goes public, by the end of May.

The National Team is finding its ways again, bringing back the good sensations it once made us feel. However, Spain is now playing with a more vertical scheme and counter-attacking 20% more often than in previous stages. 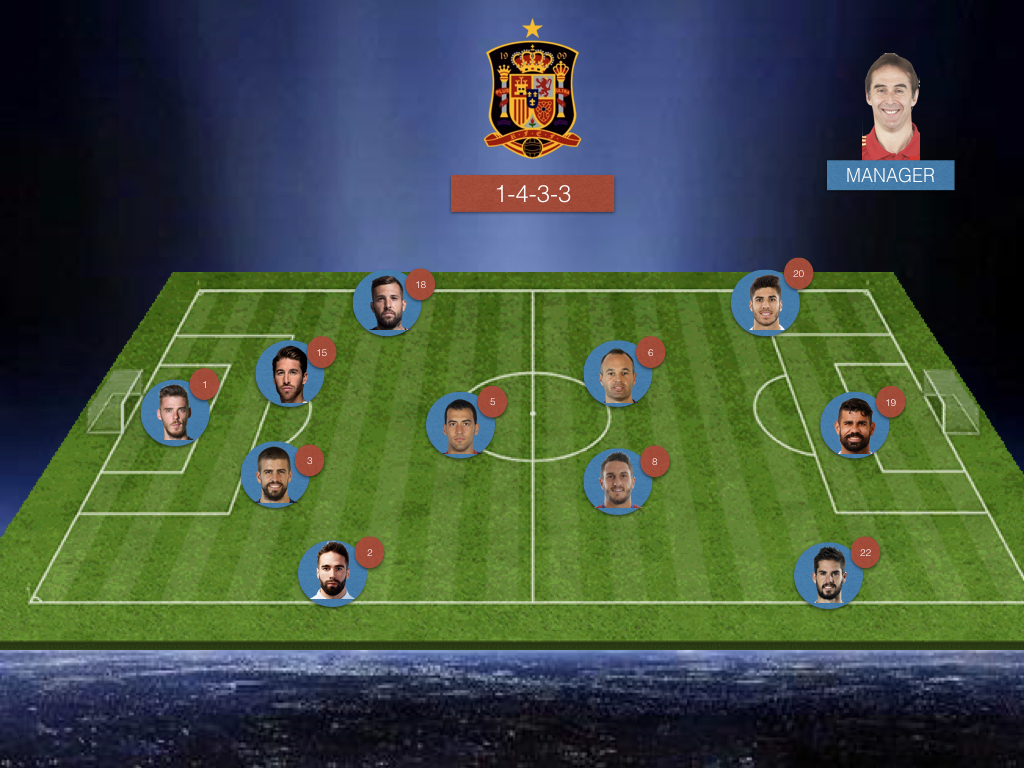 As we just mentioned, Spain attacks with a 1-4-3-3 system, looking for a very combined game and with lots of mobility from all attackers.

When clearing the ball, they don’t keep lots of fixed positions and the mobility they offer to their playmakers and wingers makes it difficult for the rival team to control the Spanish attackers. Big part of their game is based on gathering players on one side through short and close passes drawing rival defenders and, at the same time, allowing them to open spaces on the opposite track.

In this mobility, Isco represents the freedom to attack. On paper, he’s supposed to start playing on the wingers zone, but with the freedom to come from behind to receive from the midfield and move the playmaker up, illustrating the concept of the third man.

Gathering so may players together leads to opening spaces for laterals to progress while they open spaces and go deep on the exterior tracks.

And what happens when rival teams start pressuring right after the Spanish team clears de ball? Here the team uses a different resource: Marco Asensio, who provides the team with more verticality and the possibility to play in length to take advantage of his speed and the spaces.

When it comes to defense-attack phases, Spain has also become a more vertical team that takes advantage of these actions, knowing how important the offensive transitions in football are nowadays. They look for stealing in advanced zones within the rival field and take advantage of the spaces created on the outside, gaining the back of the lateral rivals.

We’ve already seen they are a team that barely got scored 3 times in the classification for the World Cup, which means they are working great on their defensive phase. There are basically two distinguishing aspects in their defensive work:

We might have found opportunity area for National Team preparation for the World Cup, as the team has the potential to get so much more out of these actions. Sergio Ramos and Gerard Piqué are the main recipients.

They’ve shown security in these actions with only one score against them during the classification phase, after a second play of lateral foul. They defend with a combined marking which places two players in the zone (on the first post) whilst the rest make a man to man marking.

We can see we have a dominant team in all game facets. Spain has found the balance between a good attack and defense, showing off the individual quality of their players, who always solve the game the right way. We’ll see many big teams in the World Cup, and we’ll have to fight against them if we want to raise the Cup. But we are certain that Spain is among the favorites.

If we want to carry out an analysis like this, download the Basic version of LongoMatch for free.