The one with France making it to the final

The winners of the semifinals already have a name. In the case of France, they got to the semifinals after eliminating Argentina and Uruguay, while Belgium had pulled out a memorable come back against Japan to then defeat Brazil in one of the best matches in this tournament. But this France vs Belgium didn’t let anyone down: we could witness the best from players like Hazard, Mbappé, De Bruyne, Griezmann and Pogba. In this post we will analyze deeply both teams’ game proposals.


To play France, Belgium displayed a play scheme tactics similar to those used against Brazil. In defense, Roberto Martínez abandoned the 3-defender line up he used throughout most of his work as the Belgium’s coach, and used a 4-3-3 to defend. In this case, De Bruyne was placed as the right winger as opposed to the match against Brazil where he played as a false 9. Chadli played as Meunier’s replacement, whilst Dembelé occupied Chadli’s position in the field. Hazard’s and De Bruyne’s positions varied, and that’s why we can talk about a 4-3-3 or a 4-5-1 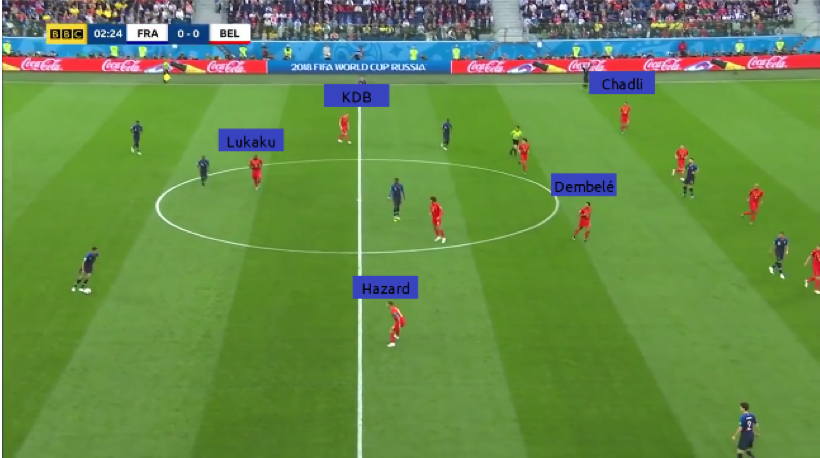 In its offensive phase, Belgium went back to its usual play scheme tactics with 3 centrals. In this case, the wingers were Hazard on the left and Chadli on the right. Kevin De Bruyne was in the center and was free to move. 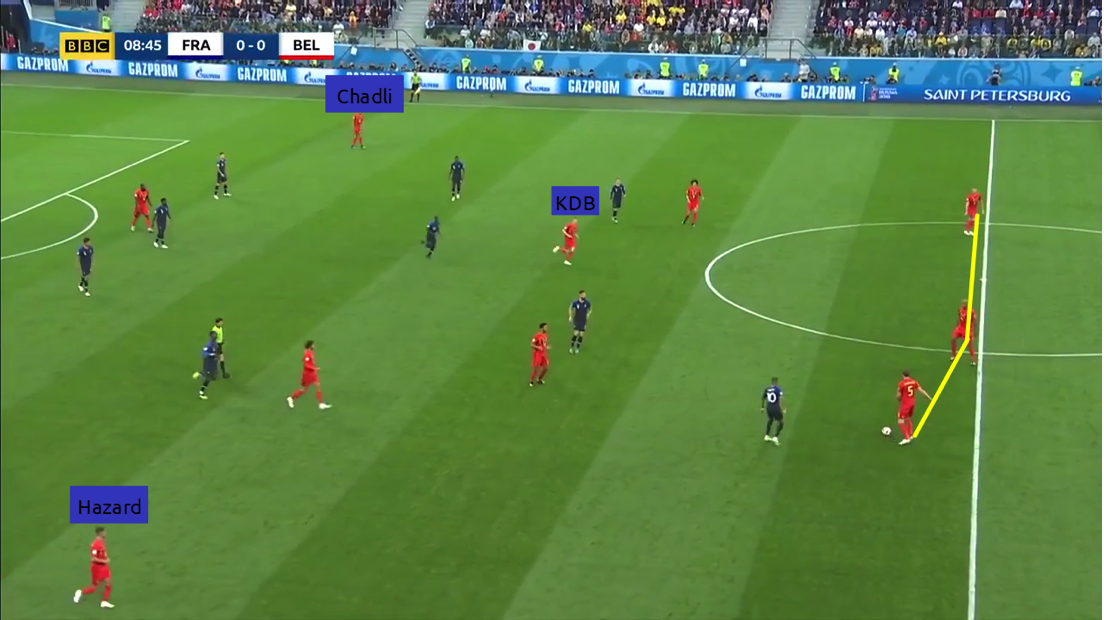 EAs for France, its formation was the traditional 1-4-3-3. The only changes were the wingers, but there were no major variations in its play scheme, as opposed to Belgium who had different formation for attacking and defending. Just like the Belgian defense, the only difference was the height of the two wingers. 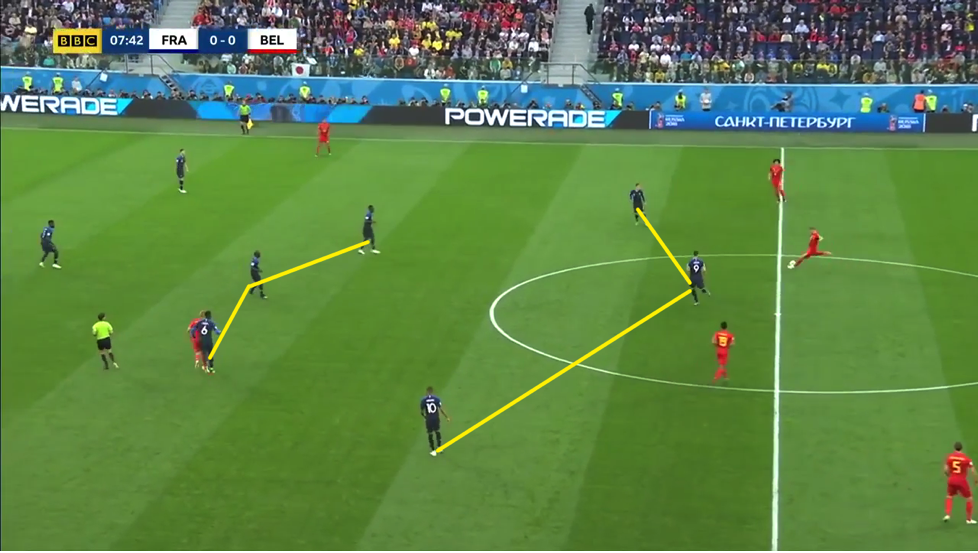 In attack, we’d have to highlight Griezmann’s freedom to move, with the left wing only being used by Lucas Hernández. Mbappe, on the other side, was always found in the right wing. 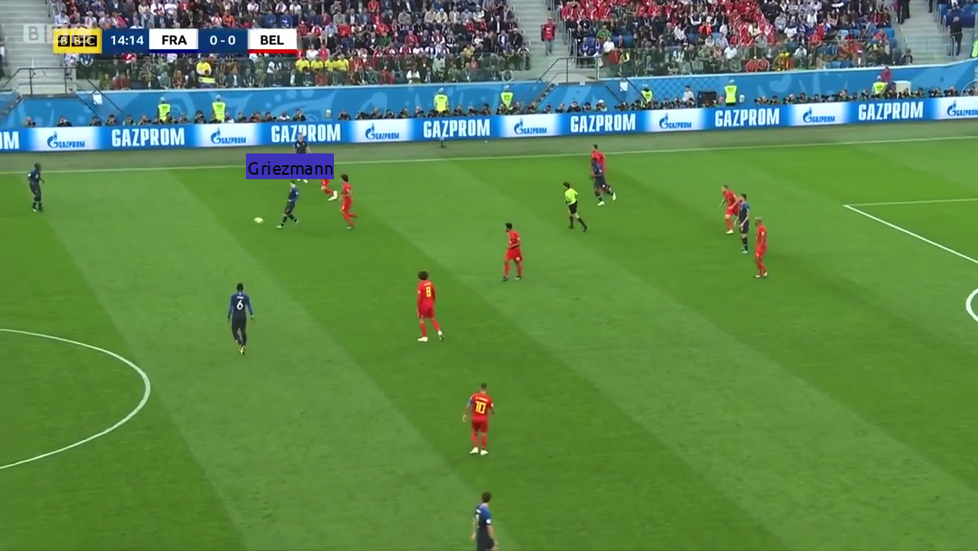 Belgium could barely manage to move out in transition. Just like Argentina, France left the wings free. In the match against Argentina, Mercado and Tagliafico could hardly put France’s defense in atight spot, but Chadli, and most of all, Hazard found a way to make France suffer.

EThe Belgian team was set out to throw the ball to the free winger. Fellaini tried to fix Pogba’s position, so he couldn’t go out and help Hazard, while De Bruyne did the same with Chadli.

LFellani’s inclusion is also explained in the offensive key. The Manchester United player would come in as another forward when there was a lateral kick. Despite his and Lukaku’s size, French centrals kept their self-confidence and barely allowed them to approach this way.

De Bruyne had liberty to attack. When Hazard and Chadli received the ball, De Bruyne would go down the wing to drown the defender and allow the winger make a diagonal. However, if De Bruyne wasn’t able to draw the defender he was left unmarked on the wing to comfortably make a pass.

With these changes, Roberto Martínez tried to center Hazard and De Bruyne. It is no wonder how he switched the two midfielders (Fellaini and Dembelé) by two wingers (Mertens and Carrasco). In fact, before changing them, it was possible to seeFellani taking Hazard’s space in the wing and the Chelsea player playing inside. 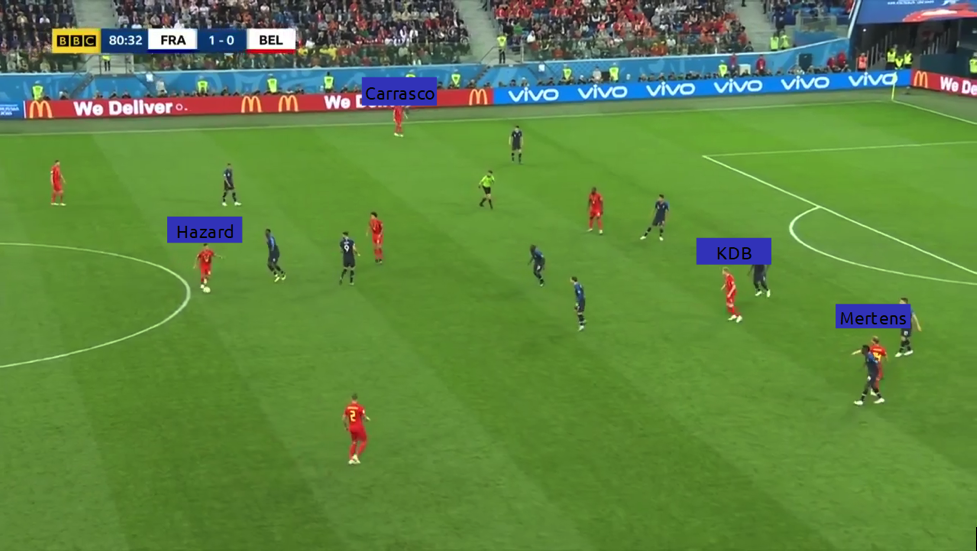 In the second half, Belgium managed to play a bit more with Lukaku and, with him playing behind their backs, it was possible to activate Hazard and De Bruyne in high positions, who, as we already mentioned, played near the center.

In this phase, Belgium tried to stop France’s transitions in two different ways: first, if the lost the ball in the ending zone, they would exercise pressure to try to recover the ball and stop France form transitioning.

The other trick Belgium used to stop France’s quick transitions were the tactical faults. This circumstance was more often seen during the second half, when Belgium tried to even the score and it became hard for them to stop the transitions from the starting point.

France once again decided to attack the way have all through the World Cup: Direct play over Giroud, who is a Titan in these actions, and fighting the second play. In these circumstances, France could quickly get to their opponents filed.

France is still very dangerous in the transitions. A key player for the team’s good performance is Griezmann at the beginning of every play. The player of the Atlético de Madrid provided their attacks with clarity and allowed to counteract the Belgian pressure with his vision of the game.

Deschamps was very well aware of the damage De Bruyne caused to Brazil when he received behind the Brazilian pivot back to initiate the transition. Deschamps decided to pressure after losing the ball and literally kept this player from connecting one of these transitions.

LThe French defense was serious in every moment. They managed their advantages wonderfully and Belgium could barely disturb Lloris’ goal. More often than not, Belgium became impatient when the team just couldn’t get rid of the very well organized French defense.

Matuidi and Kanté were essential to intercepting their opponents attack. Their presence in the French midfield makes it very difficult for their rivals to avoid the French defensive lines.

All the analyses in this article were done with LongoMatch, the sports analysis tool.