How did you become a Coach?

I started coaching while still playing and studying at university. Working with young players in the UK. In that moment coaching gave me a lot of satisfaction, I always enjoyed the competition, and reward in the development of young people.

Later on I had the opportunity to be involved with the British National team programmes, working under different coaches who became important mentors to me even to this day; Steve Bucknall, Karl Brown and Warwick Cann from Australia. That was the moment I really began to understand the role and importance of the coach, and all the demands that the coach faces. I had a special interest in performance analysis and scouting and this formed my main duties on the British programmes.

From the British programmes I had the chance to join Monbus Obradoiro in the Spanish ACB league, and am lucky to have been able to work here as a coach for the past 6 seasons.

What is you main role in the Monbus Obradoiro?

In general, my role in Obradoiro is to help the coaching staff and club in anyway possible to make good decisions using good information. Each member of the coaching staff has his own independent role, to help the head coach and the club to improve the team. From opponent analysis to our own performance analysis, team and player development as well as studying and analysing future players (what we call “under radar” process). For all these aspects to work in harmony a good line of communication is required between the coaching staff, management staff and executives of the club.

A large portion of my time is taken up working with the club academy, One of the things im most passionate about. I’m fortunate to be working with the cadete (U-16) category this year. We are very happy with our coaching staff and have clear way of working integrating: on-court, physical preparation, psychological development and video review in our day-to-day working to maximise the individual development of each player within the cadete category.

What are your main goals for this season?

As a club we always have one clear objective for each season: form a team that the fans of the club can be proud of, be competitive, plays hard and never give up. We are humble and we are aware of how difficult it is to win games in the ACB league.

An important objective of the club lies in the individual development of our players, be it the academy players with dreams of one day playing alongside their role models in the first team, a young player in the first team trying to forge a long career in professional basketball, or the veteran players still developing and refining their skill set.

What are the mandatory skills for a coach managing players at their maximum level?

A coach at the highest level needs to be knowledgeable about the game and always be ready to give a solution which can help the players. It's important to be outgoing, and easily approachable to be able to communicate and build a working relationship with the players, a relationship built on confidence and trust. Moreover a coach needs to be loyal to his peers, club and head coach to really form a strong working relationship with the team, and someone the head coach can rely on. Being adaptable links in here well, being able to be what the team and coach requires in any moment.

Ambition and passion for the job are crucial, its a competitive world, hours are long and you need to love your work to really be effective.

Nowadays the ability to not only understand, but to utilise new technology is crucial. From video analysis to advanced statistics these skills now form a core part of the coaches job specification at the highest level. 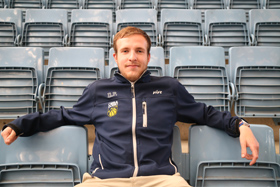 How do you organise your week to prepare for upcoming matches?

The first days of the training week are normally focused on our own team development and analysis of the previous game, to make adjustments or improve the team in a specific area. Towards the end of the week there is a big shift where we focus analysis and our practice objectives to prepare for the next game. Our week can change due to a number of factors: travel, injuries, number of weekly games and sponsorship commitments that can appear during the week. Within this training week there are also training sessions dedicated solely to the individual development of the players.

What is more important to you, analysing your own team or the rival?

At the highest level both areas are important. The analysis of both aspects goes hand in hand. Continual development of the team is key during the season. For this reason, the post game analysis of our team becomes really important, to have an objective way of analysing the teams performance, to understand perfectly the their strengths and areas for improvement.

On the other hand, analysing the next rival team has its own level of importance, as it allows to pin-point specific areas to put attention to or where we should make adjustments to be in the best position to win the upcoming game.

When you combine both aspects together it's clear that this creates a cycle of continuous development, where you are creating a game plan based upon the rival teams strength and weaknesses, then analysing that game plan in the post-game to see where we did well, and where things need to be better, which gives the coach and idea of how to keep developing the team.

When you work with the academy, what do you focus on?

Within the academy, there are many aspects that need to be considered when planning the development of the academy players. Before even speaking about technical and tactical aspects, it is important to create a culture of “Obradoiro” within the academy players that allows them to identify with the club and feel a part of what Obradoiro stands for. We believe in working hard, being tough defensively in the “basics” of the game, being humble, never give-up attitude, playing as a team and showing respect for ourselves, coaches, rivals, referees, parents and others who form part of the competition. We first try to praise these aspects and develop them as habits which form the foundation of our players development.

Later, technically and tactically, we want our players to be skilful with and without the ball, we like our players to be a threat from the moment of receiving the ball, or be prepared to receive the ball in any moment.. We put a special emphasis on our players being able to play without the ball, staying linked to the play of the other team mates, which requires a high level of concentration and means our players are never resting. We also expect our players to be able to defend effectively both the ball and away from the ball, and develop transferable defensive habits that will help them at the next level of their basketball career. Apart from this we put special emphasis on the shooting ability of our players, as it is ever more important in modern basketball, where small and taller players are required to be shooting threats from all positions on the court. The game is continuously developing at the professional level and if we want to develop players who can later compete at the highest level, we need to prepare them as best as possible for the ever-changing basketball landscape.

There are many great advantages to using LongoMatch. We find it especially useful to use with our younger players, with the ability to both analyse and present actions from one or multiple games within the same software package, while allowing us to understand our players and team progression using the statistical information that it provides. Analysing and reviewing specific behaviours of our players is useful for developing the “Obradoiro” culture in the cadete category. The more we are able to learn about the players individual habits the more effective we can be in the player development process.

The presentation aspect of the software is very useful for quickly creating a presentation of clips from different games to feedback to players and other coaching staff, helping our players to learn and make adjustments in very short periods of time.